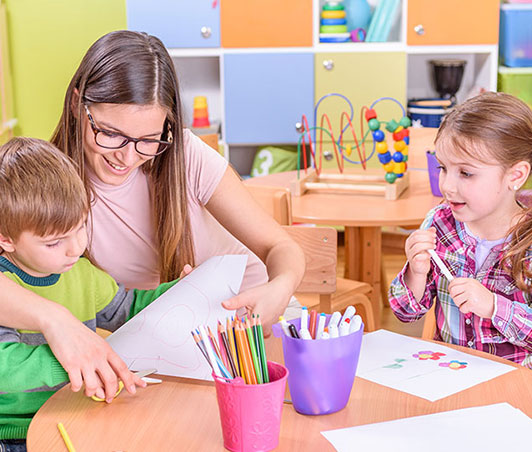 We’ve all had those moments, slack-jawed with awe, as we watch a babysitter, nanny, or teacher work the impossible with our kids. Getting our shoe-hating toddler laced up with no fuss. Training our half-wild preschooler to clear her own snack dishes. How do they do it? Well, after all, while we’re all relative newbies, the real pros have helped raise plenty of kids before ours. Naturally, they have a few tricks up their sleeves – and we thought it was high time they share a few.

The problem: Your kid is a bolter.

The cure: Turn stopping into a game.

“Running into the street was a big problem for a 2-year-old I nannied, until I developed the ‘run and stop game,'” says Los Angeles nanny Laurie Freitag. The trick is to teach your child to stop when you say so, and before you get into a scary dart-into-the-street situation. And the trick to that is making it fun. Here’s how: The next time you’re at the park, launch yourself into a slow, stomping run while shouting, “Run, run, run!” Your child won’t be able to resist running along with you. Then suddenly stop and cry, “Stop!” Your child will likely stop too. Keep playing until you’re confident your child will stop when you say so. Frietag says the next time her little adventurer started to zip into the street, “Stop!” worked like a charm.

The problem: Nagging your kids to clean up has gotten old.

The cure: Add a bit of magic.

Cleanup is a lot less stressful if an imaginary friend plays the heavy. In a moment of desperation, family coach and former preschool director Rebecah Freeling brought out a puppet that she had knit. She explained to her preschool class that the puppet was named Clean-up Clara, and that she would be playing at the preschool that night. “Let’s make it really nice so Clara can have a fun place to visit,” she said. The kids happily dove in, and it turned into a daily ritual. After clean-up time every day, Clara would emerge from her special box and check everyone’s work, doling out thank-you kisses. “It was transformative,” Freeling says. “Suddenly, it wasn’t me nagging them anymore. It was about Clara inviting them to make the room beautiful – and they so wanted to please her!”

The problem: He’s grabby with toys.

The cure: Divert the grab by getting in the game.

Any old toy becomes irresistible the moment it’s in the hands of another child. But Julie Lowen, president of Children’s Paradise Preschool and Infant Centers in San Diego, vouches for this diversionary tactic. Say your child makes a grab for Aiden’s toy phone. Explain that Aiden is using the phone right now, then follow up with something like, “Let’s call Aiden from this other phone,” or “Let’s build a cell tower out of the Legos so Aiden’s phone will have good reception.” Keeping the phone part of the game works a lot better than what most parents do: holding your child’s hands and saying, “We don’t grab.” It also helps your child develop social skills. “When kids grab toys, it’s usually because they want to play with the other child – they just don’t know how,” Lowen explains. “You can teach them how to play in a way that shows respect for a friend’s turf.”

The problem: He refuses even foods he loves.

The cure: Make it a win-win.

When a kid yowls, “I don’t like vegetables!” as you set down a bowl of her favorite steamed carrots and broccoli, it’s tempting to argue, “But you love this. You ate a whole bowl of it last week.” Is this reasonable and logical? Yes. But it’s likely to make her dig in her heels. What she’s looking for is a sense of control. Lowen suggests getting creative with your wording so that you both win. Say, “Okay, we’re not going to eat any vegetables today! We’re only going to eat carrots. Do you want to pick out the very biggest one?” Carrots are a vitamin-packed vegetable (score one for you), but your 2- or 3-year-old doesn’t know or care. What she cares about is that you seemed to hear what she said and she’s getting input on what she eats (score one for her).

The problem: She resists getting dressed in the morning.

The problem: Bedtime is an epic battle.

The cure: Introduce a bit of a choice.

Troy has seen plenty of kids who will do anything to delay their bedtime. She’s found that offering choices can defuse the situation. “I’ll ask, ‘Do you want to put on pajamas now and brush teeth after, or brush teeth now and put on pajamas after? Do you want the door open or shut?'” she says. Giving choices sounds like a simple thing, but it’s surprisingly effective. “For bigger kids, I tell them they do have to stay in bed, but they can read a book if they don’t want to go to sleep right away.”

The problem: She gets clingy at dropoff.

The cure: Don’t tell her what to do. Ask her.

When dropoffs to daycare or school get sticky, “I like to ask kids to show me how to do what I need them to do,” Troy says. Like, “Honey, can you show me how Mrs. Jones likes you to hang up your backpack? Because I really don’t know, but you do.” Ask him to tell you the names of the kids at his table, or to show you what’s the first thing that happens at school. You’ll find that it works a lot better – and faster – than acting like the expert yourself. “Put your backpack away in the cubby, and go sit at your desk” will likely result in him clinging to your hand even harder. As Troy puts it, “Kids love to show off.”

We are an Early Childhood Education Center dedicated to create a warm and loving environment while sustaining a child’s natural curiosity.